You are here: Home / Weather / More snow expected across Iowa 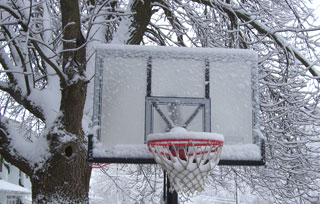 Flurries were flying this morning  across central and eastern Iowa and forecasters say — we need to get used to it. More snow is expected over much of Iowa during the next several days, according to National Weather Service meteorologist Mark Russell.

Russell says the snow should start Thursday morning and will spread across the state through the day, dumping between three and six-inches, perhaps more. Russell says the storm system is still developing and it’s hard to pinpoint what parts of the state will get the worst of it — and who might be spared.

"This looks to be more of an event where most areas get the same amounts, kinda’ widespread," Russell explains, "we don’t really think there’ll be a localized area of a lot of snow. It’ll be more like a three-to-six inch snowfall over a widespread area of the state." He says the snow will start falling Thursday morning in southwest Iowa and will spread east into the evening.

Last weekend, much of Iowa was hit with snow and a thick coating of ice, but Russell says he does not expect a repeat of that storm on Thursday. He says it’s cold enough that the Thursday storm should be all snow, but he says another, stronger storm system is developing that may hit Iowa late Friday and into Saturday which has the potential to bring freezing rain across southern Iowa, though the north should remain cold enough to get all snow.