You are here: Home / News / Forecast calls for ice and snow to hit Iowa 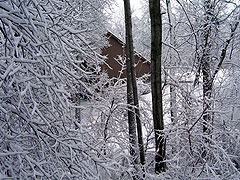 Forecasters say much of Iowa will be hit with another threatening ice and snow storm tonight, the same dangerous system that knocked out power to 300,000 homes and businesses in states to our south.

The storm is also blamed in at least a dozen traffic deaths. Rich Kinney, a meteorologist at the National Weather Service, says an Ice Storm Warning will be up for 17 counties across southern and southeastern Iowa, including the following cities: Lamoni, Ottumwa, Keokuk, Burlington, Muscatine and Davenport.

Kinney says “significant ice accumulation” can be expected in those areas, up to one-inch thick. He says travel will be very difficult, if not impossible. Homeowners can expect downed tree limbs and likely power outages resulting from the heavy ice. The Ice Storm Warning is in effect from 6 tonight through 6 P.M. Tuesday. Kinney says another large section of the state, more than 30 counties, is under a Winter Storm Warning.

That warning covers an area extending from southwest Iowa, through central Iowa and into eastern Iowa, with cities including: Council Bluffs, Atlantic, Des Moines, Ames, Marshalltown, Cedar Rapids, Iowa City and Clinton. Kinney says that section of the state likely won’t see the thick ice, but… He says there could be a half-inch to an inch of sleet, then snow could be very heavy, with some areas seeing four to five inches of snow on on top of the sleet layer.

The same storm system crippled many areas of Oklahoma, Kansas, Missouri and Illinois, closing roads and canceling hundreds of flights. Parts of Missouri got three-quarters of an inch of ice and that state’s governor has declared a state of emergency and activated the National Guard.

Kinney says Iowans need to prepare, now, for the very threatening storm system that will arrive within hours. He says, “Once this precipitation spreads into southern and central Iowa later on tonight, conditions will rapidly deteriorate and travel is certainly not advised.” For the latest on the approaching storm, visit the National Weather Service website and for travelers, see the state D-O-T’s webpage .