You are here: Home / News / Power coming back on for more Iowans 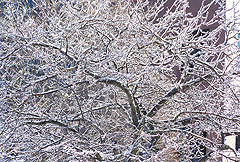 After a peak of 70,000 customers without power statewide during Tuesday’s massive ice and snowstorm, Iowa’s two largest utilities say the number has been whittled down to fewer than four-thousand.

Alliant Energy reports about 3,200 customers are still in the dark, while MidAmerican Energy spokesman Allan Urlis says they still have about 500 customers off the grid.

Urlis says all MidAmerican customers who lost power Tuesday have had power restored. Some customers are without electricity today, he says, but those are people who lost power after the storm. Some areas saw winds pick up Wednesday and Thursday, toppling ice-covered trees that survived the initial onslaught. He says the utility’s workers have put forth a dedicated week of long hours.

Urlis says: "We feel good that we’ve been able to make some significant progress. There were more than 44,000 (MidAmerican) customers who lost power sometime on Tuesday. We’ve been working around the clock to get everybody’s power back on. We had more than 800 people mobilized for the power restoration efforts." He says the worst is behind us now as any new outages will be addressed much more quickly since there isn’t a massive widespread problem.

Pardon the pun, but Urlis says Iowans may not yet be completely out of the woods."There is still some ice on trees and if there’s some wind, that could lead to additional power outages, but with the progress that’s been made the crews will be ready to respond to those as they come in," he says. Neither utility has put a dollar figure on the cost of repairing the damage from this week’s winter weather. Governor Culver has declared 22 counties as state disaster areas.