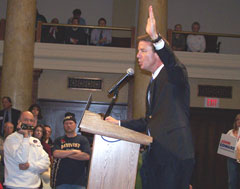 Iowa’s First Lady Mari Culver has endorsed Democratic presidential candidate John Edwards, just as she did in 2004 and she’s not ruling out starring in a campaign ad on behalf of her presidential pick.

Mari Culver did a testimonial for her husband just before the 2006 election, calling him the "big lug" in the ad. She’s not ruling out the idea of appearing in a campaign ad on behalf of John Edwards, but she says that phrase — the "big lug" — will not be used. "I reserve that term for my husband, thank you," she told reporters, laughing along with Edwards.

As Culver publicly announced her endorsement of Edwards during a rally in Des Moines, she gave a bit of a testimonial.  "I know John. I’ve known John for several years. I like John. John is a great person, a decent person, a gifted public servant with a really compelling personal story," Culver said.

Culver went on to cite his ability to "inspire the best" in people.  "I believe John Edwards can win," she said.

Part of Culver’s core argument is that Edwards was "battle-tested" in 2004 when he was the Democratic Party’s vice presidential nominee. "He’s been through this before having been on our national ticket. I think these experiences give him a real advantage," she said. "…A recent CNN poll in the last week shows that John Edwards is the only Democratic candidate who will beat every Republican in the fall."

Click on the audio link below to listen to Culver’s speech.