You are here: Home / News / December on pace to be one of the wettest in history 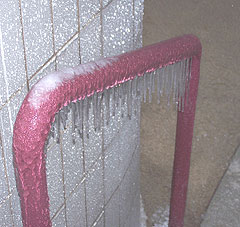 With just about two weeks to go in the month, we’re on a pace to end up with one of the wettest Decembers on record. State climatologist Harry Hillaker says there’s already been enough snow and ice dropped on Iowa to push close to the top ten.

Hillaker says we are already at 2.13 inches of precipitation, compared to the normal average of 1.23 inches. The total right now would put the state at 13th wettest Decembers on record.

Hillaker says if the trend holds, December would make a run for the top five. Hillaker says if we were to finish out the remainder of the month with normal precipitation, then we’d get all the way up to number two on the list, although Hillaker says you "never quite want to count your records before they’re actually broken." He says hitting the top spot is unlikely as that was December of 1982, when 3.43 inches of precipitation fell.

But the second spot is not very far out of possibility. Hillaker says one more storm system is expected this weekend and that could add quite a bit to the total for this month. Records show a white Christmas is about a 50-50 proposition in Iowa. Hillaker says it’s looking good to happen right now. Hillaker says everywhere in Iowa has snow and ice on the ground right now. He says temperatures are expected to be around freezing, which could lead to a little bit of melting.

Hillaker says most areas will take some prolonged melting to clear out the snow that’s on the ground. Hillaker says the possible exception could be the far northwest corner of the state, which normally is thought of as the coldest part of the state, but that area hasn’t had as much snow and ice as the rest of the state. Hillaker says Des Moines, Iowa’s largest city, has already had a record amount of snow in the first 15 days of December.