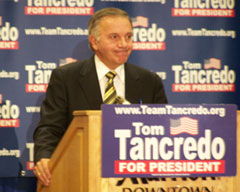 Tancredo focused his candidacy exclusively on his call for a crackdown on illegal immigration.

During a news conference in Des Moines this afternoon, Tancredo suggested his decision to back Romney came because of the "abysmal" record of Mike Huckabee, another GOP competitor who is surging in the polls. "Absolutely, it was important in making this decision," Tancredo told reporters. "You bet your life it was."

Tancredo is hoping by throwing his support to Romney, he will help ensure the defeat of Huckabee and a few other Republican candidates with whom Tancredo disagrees on immigration. "They have been on the other side of the battle for years and encouraging and even inviting, in a way, illegal immigrants into the country," Tancredo said. "I fear that remaining in this race, one I know I cannot win, could contribute to the nomination of one of those candidates…The stakes are way too high for me to allow that to happen."

Tancredo and Romney met privately today for over an hour and while the two don’t agree on everything, Tancredo told reporters he’s "putting (his) faith" in Romney.

"He is the best hope for our cause," Tancredo said.  Tancredo offered a list of what he saw as Romney’s attributes when it comes to illegal immigration. "He will secure our borders…He will prosecute employers who create the magnet that draws so many millions of illegal aliens into the country…He’ll require those who are presently here illegally to return home. He also has, by the way, a solid record that matches his rhetoric," Tancredo said. "…And finally, and most importantly, he can go the distance."

According to Tancredo, Romney "would bring honor" to the Oval Office. Listen to Tancredo’s speech by clicking on the audio link below.