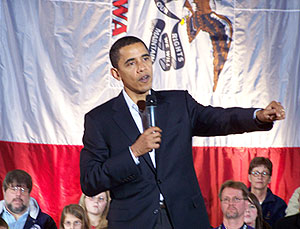 Democratic presidential candidate Barack Obama today accused rival John Edwards of having an "inconsistent" message when it comes to promising to adandon old-style politics. Obama pointed to outside groups which have purchased time on Iowa broadcast outlets to run ads promoting Edwards.

"Yesterday my understanding was is that (Edwards) said he did not approve of 527s, these independent groups where there’s no disclosure so you don’t know who’s funding them and how much is being spent," Obama said today during an interview with Radio Iowa. "We find out today that a 527 run by his former campaign manager and political director is running three-quarters of a million dollars worth of ads on his behalf and it strikes me that if you say yesterday you don’t agree with ’em and today you’re benefiting from them — that’s not consistent."

Obama and Edwards are in a tight race to present themselves as the candidate best able to enact change in Washington and Obama points to this episode as proof that Edwards "talks the talk" and doesn’t "walk the walk."

"Part of what we need is some consistency when it comes to the positions we take, not just taking them when it’s politically convenient," Obama told Radio Iowa.

"I do not support 527 groups. They are part of the law, but let me be clear: I am asking this group and others not to run the ads," Edwards said in the written statement. "I would encourage all the 527s to stay out of the political process."

On Friday, Edwards said during a news conference that he has no control over independent groups — referred to as "527s" — as by law candidates are not allowed to coordinate strategy with such groups. Edwards has not commented yet on the role his 2004 campaign manager has in heading up one of the groups planned to run ads on his behalf.