You are here: Home / Politics / Govt / Obama says his message is catching on 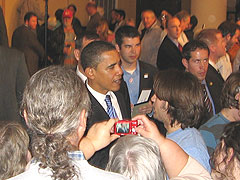 Democratic Presidential candidate Barack Obama plans to be in Iowa until the January 3rd Caucuses and scheduled five campaign stops today. He started the day in downtown Des Moines by sounding his campaign theme.

“In seven days, it is time to stand for change,” Obama said to cheers from a crowd gathered at the Masonic Rite Scottish Temple. He quickly took a shot at his closest opponents for the Democratic nomination, Hillary Clinton and John Edwards.

“You can’t fall in line behind the conventional thinking on issues as profound as war and then offer yourself as the leader who is best prepared to chart a new and better course for America,” Obama said. The Senator from Illinois claims his “message of change” is catching on with members of his party, plus Republicans and independents.

“That’s how I won some of the reddest, most Republican counties in Illinois,” Obama said. “That’s why the polls show I do best against the Republicans running for president, because we’re attracting more support from independents and Republicans than any other Democratic candidate.”

Obama also attacked his critics who claim he lacks experience in Washington, D.C. “The real gamble in this election is playing the same Washington game, with the same Washington players, and expecting a different result,” Obama said. Obama is making additional campaign stops today in Nevada, Marshalltown, Toledo, and Vinton.