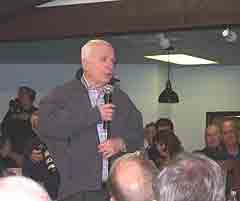 Presidential candidates campaigning in Iowa today are reacting to the assassination of Benazir Bhutto, a politician campaigning in Pakistan to be her country’s prime minister again. Republican John McCain called her death a tragedy.

"It seems to me that the winners are the radical Islamic extremists. Benazir Bhutto had dedicated herself and had said on several occasions that she would fight a battle against jihadists and radical Islamic extremists and she promised the people of Pakistan that," McCain said during an appearance this morning in Des Moines. "Well, obviously when something like this happens, who is it that gains? And that is the elements of unrest, disorder and revolution."

According to McCain, there’s no way to predict what will happen in Pakistan. "They are a nuclear-armed state, since they are our key ally in Afghanistan where we’ve been having difficulties, as you know, but this is a very tense and difficult time. I hope that we can see the unrest subside. I hope that we can see the commitment, again, of Musharraf for fair and free elections," McCain said. Pervez Musharraf is Pakistan’s president.

"Obviously one of the keys to this is going to be law and order," McCain said. "…It’s going to be a significant time of unrest."

Democrat Joe Biden said today is a "terrible day" and he’s criticizing Pakistan’s president, Pervez Musharraf, for failing to provide better security to Bhutto. "Like her father before her, Benazir Bhutto worked her whole life – and gave her life – to help Pakistan become a democratic, secular and modern Muslim country.  She was a woman of extraordinary courage who returned to Pakistan in the face of death threats and even after an assassination attempt the day of her return, she did not flinch.  It was a privilege to know her these many years and to call her a friend," Biden said in a prepared statement.

"I am convinced Ms. Bhutto would have won free and fair elections next week.  The fact that she was by far Pakistan’s most popular leader underscores the fact that there is a vast, moderate majority in Pakistan that must have a clear voice in the system.  Her assassination makes it all the more urgent that Pakistan return to a democratic path."

Democrat Barack Obama opened an appearance in Des Moines this morning by commenting on Bhutto’s assassination. "We want to make clear that we stand with the people of Pakistan in their quest for democracy and against the terrorists who threaten the common security of the world," Obama said.

Democrat John Edwards called Bhutto a "brave and historic leader." "At this critical moment, America must convey both strength and principle," Edwards said in a prepared statement.  "We should do everything in our power to help bring the perpetrators of this heinous act to justice and to ensure that Bhutto’s movement toward democracy continues."

Democrat Chris Dodd called Bhutto’s death "shocking." "As we recognize the loss of a leader today, we must also recognize the implication of today’s tragedy to the security of the region and to that of the United States. At this critical time we must do everything in our power to help Pakistan continue the path toward democracy and full elections.  Our first priority must be to ensure stability in this critical nuclear state," Dodd said in a prepared statement.

"The United States should also stand ready to provide assistance in investigating this heinous act.  And as Pakistan perpetrators to justice, it should also demonstrate that it will not allow such violence to derail democracy and proceed with elections in a timely manner."