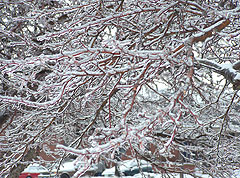 Governor Chet Culver is asking President Bush to declare 30 Iowa counties federal disaster areas as a result of the snow and ice storms earlier this month.

Voorhees says there was quite a bit of damage due to downed utility lines. Voorhees says the counties, mainly in southern and eastern Iowa, took a big hit, with the damages under this program estimated at 16.5 million dollars. He says the overall damages are substantially higher as this doesn’t include the damages to private facilities.

Voorhees says a couple of southern Iowa counties were really hit hard. He says the heaviest damages were in Ringold and Union counties and 10-million dollars of the damage was to public utilities. Voorhees says the request is now in the hands of federal officials.

Voorhees says the governor’s letter requesting the disaster declaration is first viewed in Kansas City and then moves on through the federal government. He says a decision could take days, or weeks. Voorhees says if the federal designation is approved, it would be a big boost to the county and local governments in recovering from the storm.

Voorhees says the federal government covers 75% of the damage, the state 10%, and local entities the remaining 15%. The other counties covered in the request are: Adair, Adams, Appanoose, Cedar, Clarke, Clinton, Davis, Decatur, Fremont, Iowa, Jefferson, Johnson, Jones, Keokuk, Linn, Lucas, Madison, Mahaska, Marion, Monroe, Montgomery, Page, Taylor, Van Buren, Wapello, Warren, Washington, and Wayne. If the federal disaster request is granted, it would be the fifth federal designation this year for the state of Iowa.