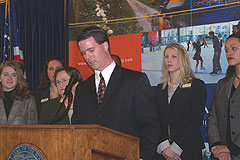 The statewide commission created to find ways to keep more young people in the state released a report today four months after beginning their work. Kyle Carlson of Colfax, the chair of the "Generation Iowa Commission," says getting young people here isn’t a problem.

Carlson says the state actually has a "brain gain" as one of the top states for importing colleges students, but he says keeping the students is the problem as Iowa also is a leader among states where students leave after graduation. Figures from the commission show just over 4,000 Iowa high school students leave the state after graduation, while more than 12,200 come to Iowa colleges from other states.

Carlson says those out-of-state students study here, then pack up and take off after getting their degree."That’s really been the key focus for us..to try to figure out how to reverse that trend so we’re not just a revolving door of bachelor degrees out of the state," Carlson says. He says graduates would stay here if they had a good-paying job.

Carlson says the largest challenge the commission sees is that the state lags in "wages for young professionals" jobs and students are burdened with high student loan debt. He says most of the people who talked to the commission gave that as the number one reason for leaving, "they want a high paying job in a career in their field." The commission has come up with four main recommendations for improving the situation.

Carlson says number one is "bridging the wage gap and reducing student loan debt," with number two being help for young people to let them know what their career path can look like. Carlson says the commission is recommending that the state create a higher education tax credit, and a student loan repayment assistance program. He says they also suggest the state adjust tax incentives for the Grow Iowa Fund, increase Medicaid reimbursement and encourage a greater number of government contracts be given to businesses owned by Iowans under the age of 35.

Carlson says they also suggest the state look at putting more money into quality of life and amenities for young people. He says a lot of people who currently look here see that as a main priority, what are they going to do recreationally. Carlson says the fourth point is to work to market the state in a much more effective and efficient way.

The Governor’s budget recommendations will be released Tuesday, and Lieutenant Governor Patti Judge was asked the plan includes any money for the Generation Iowa Commission goals. Judge did not answer the questions directly, but indicated it’s not in the plan.

Judge says they are now at a point where the budget is done and the legislative agenda is set, "that doesn’t mean something can be slipped in if we need to." Judge says the initiatives don’t have to go away if they don’t get done in this legislative session. Carlson agreed with Judge.

"The commission is very well aware that this is a long-term project, and so I don’t think we’re gonna be disheartened or anything in terms of the realities that are the 2008 legislative session when that happens. But this is a long-term project for us and really reversing the trend," Carlson says. Carlson says the commission will continue its work on the problem and do what it can to help the legislature.