You are here: Home / Politics / Govt / Iowan writes book about soldiers in the War on Terror 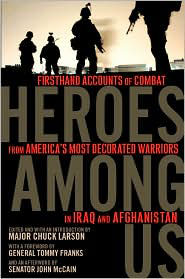 The former chairman of the Republican Party of Iowa has written a book about some of the soldiers that have served time in Iraq and Afghanistan. Chuck Larson Jr. is himself a Major in the U.S. Army Reserves and spent one year in Iraq with the 372nd Engineer Group.

During that time, he met many of the men he profiles in "Heroes Among Us," which is published by Penquin. All of the men Larson writes about received a Silver Star, Navy Cross, or the Medal of Honor for their service in the War of Terror.

"From a military perspective, these are our nation’s most distinguished warriors," Larson said. "These are awards that are given for valor under fire or in combat. As I was working with families who’d lost loved ones in the war, we discovered some remarkable stories and decided that America needed to learn about these stories."

Larson believes his book should appeal to a wide audience, saying the stories are about leadership. "It would have been so easy to drop behind the dirt hill, to not step out into the line of fire to save a fellow Marine, not to cross that field," Larson says of the soldiers in his book, "but they all made the decision to do it."

The book includes a foreword by General Tommy Franks and an afterword from Arizona Senator John McCain. Just this week, Larson was sworn-in as the new U.S. Ambassador to Latvia and will be moving there soon with his wife and two sons.