You are here: Home / Military / Lawmaker honored for service in the Iowa National Guard 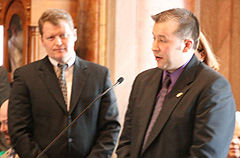 A state lawmaker who missed the past two legislative sessions because he was on active duty in Iraq was honored this morning in the Iowa House.

Representative Ray Zirkelbach of Monticello is in his second, two-year term in the Iowa House. He was re-elected in 2006 while he was serving in Iraq.

The 29-year-old Zirkelbach is a member of the 133rd Infantry Division of the Army National Guard, the unit that was on duty in Iraq for 15 months — longer than any other unit in the U.S. military. Zirkelback, who served as a truck commander in Iraq, provided security for convoys through what was at the time Iraq’s most dangerous province.

Zirkelback, who served as a truck commander in Iraq, provided security for convoys through what was at the time Iraq’s most dangerous province. Zirkelbach’s convoy was hit while he was in Iraq; he was wounded and he has received a Purple Heart.

"I’ve anxiously anticipated this day for over two years now and I’m glad to be back in the Iowa House," Zirkelbach told his colleagues this morning. His 21-month-old daughter, Claire, was born while he was on active duty. His wife, Emily, is a nurse at the University of Iowa Hospitals. Zirkelbach’s wife and daughter joined him today at the statehouse.

"To my wife and my daughter, thank you. That’s who helps soldiers make it through, their family, and especially this cute little girl who’s sleeping right now and my beautiful wife," Zirkelbach said. Zirkelbach called his fellow soldiers a "the greatest group of guys."

"The past two years have given me a unique perspective on returning combat veterans," Zirkelbach said. "Iowa’s been steadily moving forward with veterans issues and concerns. Today I’m asking for your help and support to ensure that all Iowa veterans have access to medical and mental health service as well as educational (and) employment support help that we deserve."

House Speaker Pat Murphy, a Democrat from Des Moines, presented the family with an American flag this morning. "Two years ago on this first day of session, Ray’s wife…put a picture of Ray on his desk (in the Iowa House) and we draped a flag over his desk waiting for his return. It was longer than what we expected, but we’re happy to have you back," Murphy said this morning. "We’d like to present this flag to you…to keep and cherish."

The first bill that was introduced today in the Iowa House was a bill that would penalize employers who fail to let a guard soldier have their job back after they return from active duty. Zirkelbach is chairman of the House Veterans Affairs Committee which will consider the bill first.