You are here: Home / Crime / Courts / Governor Culver to give his first "Condition of the State" address today 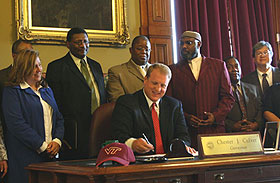 Governor Chet Culver delivers his first “condition of the state” message today to the 150 members of the Iowa Legislature. Culver was sworn into office last January, but out-going Governor Tom Vilsack delivered the 2007 “Condition of the State” speech.

“It is very challenge to keep a ‘state of the state’ short because I care so passionately about the state that I love and there are so many issues that I need to talk about,” Culver said last week during a telephone interview. Also today, Culver plans to present lawmakers with an outline for state spending in the next budgeting year which begins on July 1st.

“We’ve gotten a very fair budget together that we will present and we have also found a way to make sure we protect our priorities and honor the commitments that we made to Iowans last session,” Culver said. According to Culver, the budget plan he’ll forward to lawmakers will be balanced.

“That’s my job, frankly,” Culver said. “Arguably, one of the most important aspects of the job is keeping our fiscal house in order. I’ve got a track record of doing that.” Legislators from both political parties have talked for the past few years about trying to enact some health care reforms, but there’s been no broad agreement on a wide-ranging approach. Culver suggests this might be the year of a breakthrough on the topic.

“I am very open to doing whatever it takes to cover every child in this state and every Iowan,” Culver said. “You know, it’s just not right that a quarter of a million Iowans don’t have health care, including tens of thousands of kids.” Culver’s “condition of the state” speech begins at 10 o’clock this morning in the statehouse.