You are here: Home / News / Snow drops on much of state, wind on the way 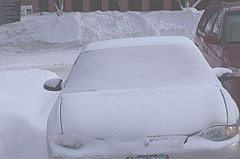 Iowans, across much of the state, are digging themselves out from several inches of snow that fell overnight.

Cogill says most locations in that band received 4 to 7 inches of snow. Temperatures dropped enough overnight to produce fluffy, light snow – making it easier for Iowans to move this morning. A bitter cold front is expected to move into the state on Friday.

Cogill doesn’t expect much snow with the next system, but strong winds will blow the snow that’s on the ground now, creating blizzard conditions Friday afternoon into the night. Temperatures through the weekend will be some of the coldest of the season.

"Right now, we’re looking at daytime highs at right around zero in central Iowa," Cogill said. "In northern Iowa, highs may struggle to even get above zero."