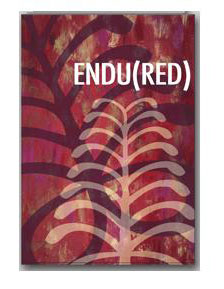 An Iowa State University student is among the ten finalists in a national contest to design greeting cards. Kelsey Hargens, an ISU senior in graphic design, says she’s thrilled she did so well in Hallmark’s "Project Red" competition, card sales from which help benefit the Global Fund to help eliminate AIDS in Africa. Hargens, who’s originally from Hudson, describes the card she created.

It contains an African symbol called "aya" for fern, which also means endurance and how we have to get through life’s issues, which she says is perfect for Project Red. It also features the word "(ENDU) RED," utilizing "red" in the word "endured." Hargens says she did a lot of research to create her card design and it really paid off for her.

She says, "Hallmark was very, very impressed with this and they couldn’t believe that I thought of this symbol too because their new line that they’re coming out with, before they even saw mine, they’d already designed their whole line with this fern." The company put all ten of the finalists’ cards online and 75-thousand people voted on their favorites. While Hargens’ card wasn’t the ultimate winner, she says she’s beyond happy to have made the top ten, knowing hundreds of designs were submitted.

Hargens says she won $250 from Hallmark, money she turned around and donated to Project Red. She also got 20 copies of the card she designed which also carries her picture on the back and a little story about how she created it. "It looks really good on my resume," Hargens says, especially since she’s planning to apply for an internship this summer — at the Kansas City-based Hallmark.