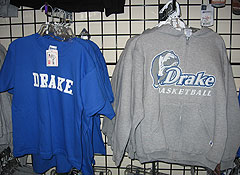 A lot of Iowans are throwing their support behind the Drake mens basketball team, which is in the midst of a remarkable season.

The Bulldogs have won 17 straight games and will go after number 18 tonight when they host Creighton.

"With everyone getting excited, they want to wear blue or if they have a ‘white out’ they come in and get all the white merchandise they can…so it’s definitely impacted what’s going on," Wilz said. The "white out" is tonight’s promotion. Fans are urged to wear white colored Drake clothing to the game. Tyler Young of West Des Moines was in the bookstore Tuesday with a couple of friends. They landed tickets to tonight’s sold-out game and were shopping for white Drake shirts.

"The (Drake) basketball team’s been playing really well and we thought we just get involved and go out and support the local team," Young said. The bookstore had one of it’s busiest days ever on Monday. The Drake men made 13 three-point baskets in Saturday’s victory over Northern Iowa. The bookstore offers a three percent discount for every three-point basket made, up to 30%, on the following business day. 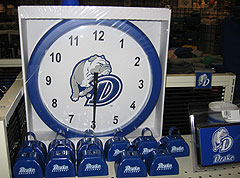 "It was a little bit on the crazy side," Wilz said of Monday’s business. "With students coming back and still getting books…and then having clothing (sales) as well – a lot of people were picking up a lot of great merchandise." The Drake men have an 18-1 record and are ranked 16th in this week’s Associated Press poll. It’s the Bulldogs’ highest ranking since March of 1975.