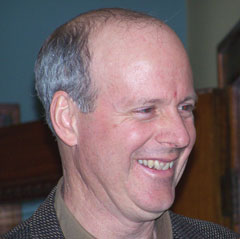 "Washington, D.C. is in desperate need of change," Fallon says. "People elected a Democratic congress two years ago in the expectation of more boldness, of more vision, of more change and it’s not happening and it’s not happening in large part because we’ve got about 30 congressional Democrats who are voting too often with George Bush and too often against the priorities of what most people want."

Fallon says Boswell is endangering Democrats’ chances of holding onto the third congressional district seat by refusing to step aside and let another Democrat take a shot.  "If Leonard Boswell was voting more with the Democrats and less with President Bush, he probably wouldn’t have a challenger. I mean, if I was happy with the job he’s doing I wouldn’t be challenging him," Fallon says.

Fallon also points to Boswell’s previous promise that he’d serve only six years in congress, but now he’s seeking another term that would mean Boswell would be approaching 14 years in the U.S. House by 2010. Fallon wonders if the 74-year-old Boswell would choose to run again in 2012, a key year when Iowa stands to loose a congressional seat because the district lines will be redrawn according to new census figures.

"In 2012, we lose a district. Iowa goes from five to four. It’d be really good to have a Democrat in this seat with some incumbency who can be prepared in 2012 to run against (Congressmen) Steve King or Tom Latham because it’s very possible that much of the third district will get thrown in with one of those two Republicans," Fallon says. "…People need to be thinking in the long-haul. We’re going to lose a district. We’re going to want a Democrat in this district with some capacity to build a base in preparation for 2012 and beyond."

Fallon also says the results of the Caucuses show the "change" candidates of Barack Obama and John Edwards were more popular with Iowa Democrats than Hillary Clinton, who Fallon says is a "status quo" politician. "That was the candidate that Boswell endorsed, of course, and she did not do well in the third district," Fallon says. "I was, obviously, an Edwards guy but I’ve become as of two days ago an Obama guy and I hope he does well on ‘Super Tuesday’ and I think if he’s our nominee he will win and I think he will help pull a lot more people out in November than Hillary Clinton will."

Fallon made his comments this morning during taping of the Iowa Public Television program Iowa Press which airs tonight at 7:30.

A senior advisor for the Boswell campaign responded to Fallon’s remarks. Jodi Winterhoff says Iowans care more about economic issues facing them right now than who runs in 2012.  And Winterhoff says Boswell fought hard for the federal minimum wage hike and continues to fight for veterans returning from Iraq.