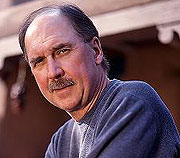 The fourth installment in the Rambo movies is in theaters nationwide, and the self-proclaimed "father" of the machine gun-toting warrior is a former University of Iowa English professor. David Morrell’s 1972 novel "First Blood" was the basis for the original movie which came out a decade later starring Sylvester Stallone.

Morrell says the title character of this latest Rambo sequel is the first one that’s really true to the troubled Vietnam War veteran he created and wrote about so long ago in Iowa City.

Morrell says: "I was just stunned when I saw the movie. It’s not a perfect film. The villains are quite simple. But as a Rambo movie, this is an astonishing film because the character is suddenly like another Rambo. It’s the Rambo of my novel, a very, very angry, embittered man."

The novel "First Blood" was one of the first to depict the effects of post-traumatic stress disorder — which did not have a name in 1972 — and remains a timely book because of this theme. Morrell finished "First Blood" during the second of his 18 years of teaching English at the U-of-I. Morrell, whose 30th novel will be coming out this fall, says he was particularly struck by one of Rambo’s lines in the new Stallone film.

Morrell says: "He’s going back into combat again and he’s making a knife and he says: ‘Admit it. You didn’t kill for your country, you killed for yourself and for that God will not forgive you.’ That line just sends chills through me because it’s the last thing you would expect to see in a Rambo movie, an anti-war movie in the spirit of the original book." 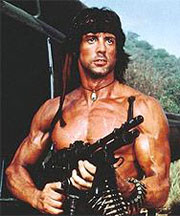 In that original book, the main character dies in the end, but movie producers decided the focus of "First Blood" needed to live and fight on as an iconic action hero.

Morrell, who now lives in Santa Fe, New Mexico, says he gave up editorial control over Rambo long ago when he sold the rights to that first book, so he’s not angry or surprised by the changes Hollywood has made in his flawed fighter.

"If I sell you a house and I come back ten years later and you’ve added a second story and you’ve put a triple-car garage instead of a two-car garage on it, you would not expect me to come hammering on your door and say, "Hey, you changed my house’," Morrell says.

The book "First Blood" has been translated into more than 20 languages and has never been out of print — a rarity for a book which debuted 36 years ago. Rambo is considered by some to be one of the most famous literary characters created in the 20th Century, ranking alongside Sherlock Holmes, Tarzan and James Bond.