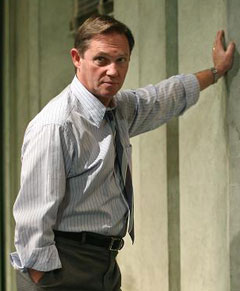 The actor much of the world knows as John Boy will be returning to Iowa this week. Richard Thomas, who won an Emmy for his TV role on "The Waltons" three decades ago, is starring in a stage production of "Twelve Angry Men" in Des Moines.

The 56-year-old Thomas acknowledges the continued popularity of Waltons re-runs in Iowa and around the globe, but he says dedicated audiences shouldn’t look for any more sequels.

Thomas says, laughing: "No, no, we’re all too old and fat. We’re not going to do any more. We’ve had a great time. We’re very close to each other and those reunions were really wonderful for us to get together and have fun again but I think we’re done with that." While the series ran from 1972 to ’81, several reunion shows have been shot over the years, the most recent being "A Walton Easter" in 1997.

The original show followed a large fictional family living in rural Virginia during the Depression era. Thomas, who’s spent 50 years performing on stage and before the camera, laments that there are no TV shows that follow in the tradition of the program that made him famous. "The most important thing would be to see a show on television now that would tap into what made ‘The Waltons’ so terrific then."

Thomas began his professional career at age seven and first performed on Broadway at age eight in a play that also featured James Earl Jones. Thomas has seven children of his own — the youngest son, Montana James, is 11. He says he’s just not a fan of reality TV and longs for quality family programming on television today that could follow the Waltons’ legacy.

"That’s really lacking at the moment. There’s nothing even remotely like that show on television which is too bad," Thomas says, "not that there isn’t a lot of great stuff on the tube right now but there isn’t anything that quite fits that mode for the family and for the American lifestyle. It would be nice to see a new show like that on the air."

Thomas’ last trip to Iowa was in 1992 for filming of the movie "Crash Landing" in Sioux City. It chronicled the true-life story of the 1989 crash of a United Airlines D.C.-10 in that northwest Iowa city. The production of "Twelve Angry Men" opens Tuesday at the Civic Center of Greater Des Moines.