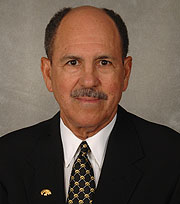 Ferentz says if you look at Jackson’s resume, you see a “demonstration of excellence at all levels,” including 26 years in college, 15 years in high school and five years with the San Francisco 49’ers including five Big Ten titles and a Superbowl.

Ferentz says the impact that Jackson has had on others is what stands out more than anything. Ferentz calls Jackson a good friend. Ferentz says he’s extremely thankful to get the chance to work with Jackson. Jackson says it has been a good career.

Jackson says he’s had a chance to work with some good young men and many turned out to be good football players. He says this is the right time to retire, although he’s not sure yet what he will do no next. Jackson originally came to Iowa under Hayden Fry, and stayed from 1979 through 1991. Jackson talked about some of his favorite memories at Iowa.

Jackson says beating Michigan with a field goal to stay number one in the country, upsetting Wisconsin in Barry Alvarez’s last game and beating L-S-U on the last play of the game in the Outback bowl were all highlights. Jackson coached nine of the 11 Hawkeye running backs who have rushed for over 1,000 yards in a season and 12 running backs Jackson has coached in college have gone on to play in the NFL.