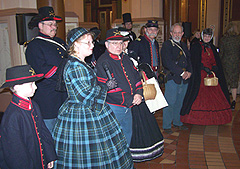 Reed says today marks the official kickoff of two years of events in the state to commemorate Lincoln’s life and legacy. Reed says communities across the state are being encouraged to create events for the celebration, and the committee has created a webpage to let everyone know about the events.

Reed says the Iowa Lincoln Bicentennial webpage  and they will keep it updated with current information. Iowa Governor Chet Culver signed a proclamation today honoring the 16th president, and setting off the celebration of his birth. Culver says Lincoln had many ties to Iowa, and visitors to the capitol are reminded of those ties by the statue of Lincoln and his son Tad on the west steps of the building.

Culver says the statue was given to the state by the people of Iowa and paid for in part by a statewide penny drive by students to commemorate the 100th anniversary of Lincoln’s Gettysburg Address in 1861. Culver says Lincoln’s ties to Iowa are also evident inside the capitol in the many battle flags from the Iowa units that served in the Civil War under Lincoln’s leadership.

"As we celebrate Black History month, it is only fitting to honor President Lincoln by recommitting ourselves to the values that he lived for, unity, justice and freedom for all Americans," Culver says. The ceremony today included several people dressed in period costumes from the Civil War era, and a presentation by Stan De Haan, who dresses and looks like Lincoln. 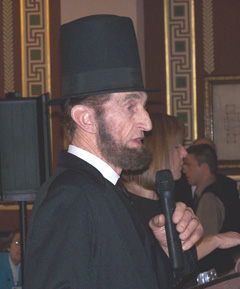 De Haan talked about the president’s early life, and the move at age 19 that took him to Illinois. He says they moved to Springfield, Illinois and it was the place where he "lived the biggest part of his life". De Haan recounts how Lincoln made 25 cents a week at his job and by law gave the money to his father. Many other states are participating in the events celebrating the 200th anniversary of Lincoln’s birth and the national kickoff of the bicentennial was today in Kentucky.