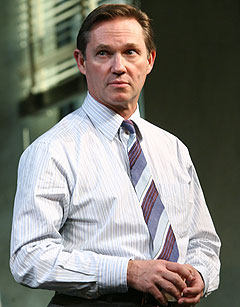 An Emmy-winning actor with five decades of experience on the stage and screen is on his first-ever national tour with a production that’s making one stop in Iowa this week. Richard Thomas, best known for his role as John Boy on the long-running TV show “The Waltons,” is playing Juror Number Eight in the courtroom drama, “Twelve Angry Men.”

In an interview with Radio Iowa, the 56-year-old Thomas says this play has such incredible impact, he couldn’t turn down the chance to play it nightly on the road. Thomas calls the play a “great story about 12 men in a jury room in the mid-50s talking about a case of a 16-year-old boy accused of murdering his father. Eleven guys think he did it. One guy’s not sure and just wants to talk about it. The drama goes on from there. It’s 90 minutes of really fantastic dramatic power. It’s a wonderful evening.”

Thomas’ acting resume features more than 95 movies, plays and TV shows, in addition to his producing and directing credits. While most folks will recognize him from his many performances in film and television, Thomas says he’s managed to divide his career fairly evenly between being on the screen and performing live on stage.

Thomas says: “I’ve always done theatre. I started in theatre in the late 50s on Broadway. It’s the thing I love most and the thing that I enjoy doing. It’s very, very different from working in front of the camera which is also a thrilling and challenging job but I love working in a good play in the house, in front of a live audience, as most actors who do both also love.”

Now the father of seven and living in New York, Thomas says he started acting when he was a seven-year-old and first performed on Broadway when he was eight. He admits, very few people get their life’s calling so early.

Thomas says: “I was very fortunate. I just knew at a very small age that I wanted to act. My parents were in the business. They were ballet dancers. I had grown up back-stage and loved the atmosphere of the theatre and the people. It was, I suppose, natural to say, ‘Well, I want to do it too,’ but I did want to act. Dancing wasn’t the thing that I was looking for.” The show “Twelve Angry Men” opens today at the Civic Center of Greater Des Moines . It runs through Sunday.