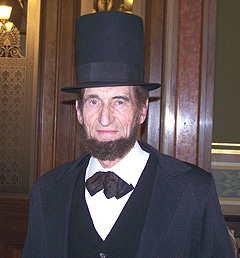 Today is Abraham Lincoln’s birthday and if you want to find out a little more about our 16th president, an Iowa farmer can provide you with the background and a real life visual to go with it.

Stan De Haan gave a stirring presentation at the state capitol Monday on the life of Abe Lincoln from boyhood to assassination in the kickoff to the Iowa Lincoln Bicentennial Celebration.

The crowd stood up and clapped as De Haan finished his presentation — a far cry from the first performance the farmer from Newkirk in northwest Iowa gave back in 1982. He had grown a beard for his church’s centennial celebration, and then his daughter asked him to come and speak to her students about Lincoln.

De Haan used a borrowed top hat and black wedding suit in that first presentation and from there continued speaking at schools, churches and retirements homes. Later on he heard about a Lincoln look alike contest in Lincoln, Kansas and went and won it. His wife Ruth sewed him a black long coat, he memorized more Lincoln speeches,and he went on to join the Abe Lincoln Presenters Association.

At six-foot-three, De Haan is just an inch shorter than Lincoln, and has won four Lincoln look alike contests.  "I enjoy reminding people of the type of person that Lincoln was, especially his faith in God," De Haan says, "that he was a self-taught individual, and if you hear his speeches, they are just so precise and he could put so much into a few words."

De Haan says he often gets emotional when giving some of the Great Emancipator’s speeches, and is thrilled that he draws such a response.  De Haan has one other thing in common with Lincoln, his wedding anniversary is today, February 12th, Lincoln’s birthday.