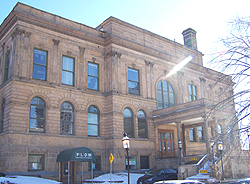 The Monsanto Company is pledging five-million dollars to help the Iowa based World Food Prize Foundation (WFPF) renovate an old building in downtown Des Moines into a public museum.

WFPF President Ambassador Kenneth Quinn announced the Monsanto gift before several dozen people Friday inside the old Des Moines Library. "When you came in, it’s fair to say you were coming into the old public library," Quinn said. "But when you leave, you’re going to be leaving the Norman E. Borlaug Hall of Laureates." Monsanto President Hugh Grant, an Ireland native, says he remembers learning about Dr. Borlaug’s work in school.

"He was a hero and is a hero today," Grant said. "I think the unique thing about Norm and his insight and his connection with youth is going to become more important in the future than it has been in the past." The Monsanto donation will also help make the old library the permanent home of "The Borlaug Dialogue," the World Food Prize’s annual symposium focused on global food security. 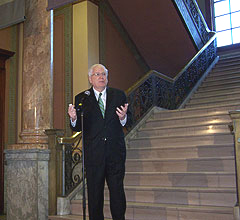 "We wanted to show our commitment and support to Norm’s vision of knowledge transfer, building wisdom and creating dialogue by pledging five million dollars to the fund that will build this institution," Grant said. Polk County and the Ruan family have also pledged five million dollars each to the $29.8 million project. Quinn says the World Food Prize has secured $19.3 million so far and the Borlaug Hall of Laureates is scheduled for completion in 2010.