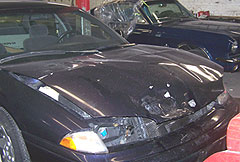 The icy weather this winter has meant a boom in business for auto body shops in the state.

Robert Buchanan is general manager of a body shop in downtown Des Moines. He has 13 technicians working overtime fixing a parking lot full of banged-up vehicles.

Buchanan says, "In the last two months, they’ve been coming one right after another." Buchanan says he doesn’t want anyone to get hurt in a crash, but admits the hazardous driving conditions have been a blessing for his bottom line. He says they’ve had more business this winter than the past two.

"But we didn’t have much of a winter last year," Buchanan pointed out. His shop has two levels and they’re both full of vehicles with smashed-in side panels, busted-up front grills and demolished rear bumpers. Buchanan compares his shop to a "McDonald’s drive through." Motorists calling Buchanan’s shop are being told it could take two weeks before a body mechanic is even able to look at their vehicle.