You are here: Home / Weather / Subzero temperatures to spread over Iowa 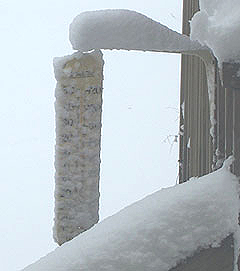 Travel is still not recommended in parts of eastern Iowa, including a portion of Interstate 80, two days after Sunday’s snowstorm. And it appears conditions could get worse.

"Any light snow that does fall – and generally speaking, we’re not looking for more than an inch or so across northern Iowa – will blow around quite a bit," Vachalek said. "So there will be some additional problems with blowing snow tonight especially."

Vachalek says northwest winds of 15 to 20 miles per hour, with gusts up to 30, will hamper efforts to clean up roads that are already coated with ice and blowing snow. He says travel is still "somewhat dicey" across the eastern and northeastern sections of the state.

"And because they had the most snow over the weekend it’s probable that they’ll see some similar conditions,in part, tonight and tomorrow," Vachalek said. Actual temperatures overnight will dip between 5 and 10 below zero, while wind chill readings will drop to 20 to 35 below zero.