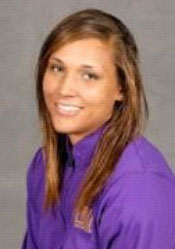 State officials today honored an Iowa native who may compete in this summer’s Olympics in China. Lolo Jones graduated from Des Moines Roosevelt High School in 2000.

She is the reigning U.S. indoor track and field champion in the 60 meter hurdles and will compete soon for the chance to represent the U.S. in the Olympics.

“It’s just great to be back home. It’s sad that I have to leave in a couple of days to go to Boston, but I will represent Iowa (and the) U.S. in the following days and the following weeks for the World Championships and hopefully, later on — you know, for the Olympics,” Jones says.

Jones, who is 25 years old, was recognized today in the Iowa House of Representatives during a ceremony to mark Black History Month. Jones is of African American, Native American, French and Norwegian descent. She was named the USA Track and Field’s “Athlete of the Week” on February 12th after placing second in the women’s 60 meter hurdles in a race in Germany. She recorded a personal best in the race — 7.7 seconds. That stands as the third-fastest time ever for an American.

“I’m just, like, really excited and just nervous for this whole year,” Jones said during the statehouse ceremony. “I’ve always just been so thankful for the support that Iowa has given me…The upbringing and the roots I established here, they carry me every day even though, I mean, I don’t reside here in Iowa anymore. Eventually one day I will return. You know I have to train in the sun in Louisiana.” Jones is a graduate of Louisiana State University.

Jones was among a handful of Iowans who received awards to commemorate Black History Month. Governor Chet Culver urged “all Iowans” to focus on the importance of black history in the state. “Iowa was one of the very first states…to assure African Americans had the right to vote,” Culver said. “And as a result of that in 1868 during his run for president, Ulysses S. Grant referred Iowa, referred to our state as ‘America’s bright, radical star.'” During the Civil War, Iowa had more soldiers, per capita, serve in Grant’s “Grand Army of the Republic” than any other state.

Representative Wayne Ford, a black legislator from Des Moines, noted the state’s pioneering record on civil rights. For example, in 1868 the Iowa Supreme Court ruled segregated schools were illegal in the state. In 1873, the state Supreme Court ruled African Americans were entitled to equal treatment in public accommodations. And in 1875, the state’s high court ruled Iowa schools could not refuse to admit African American students.

Governor Culver closed his remarks with this. “Where there is a challenge, we will meet it. Where there is progress, we will build on it. Where there is hope, we will all share it. We will meet our goals together as one Iowa with one unlimited future,” Culver said. “As we celebrate Black History Month let’s recommit ourselves to ensuring the talents, goals and dreams of Iowa’s African Americans are honored and remembered every month of the year, every day.”

The U.S. Census Bureau estimates there are just over 73,000 African Americans in Iowa. That’s about two-and-a-half percent of the state’s population.