You are here: Home / News / Girls tournament opens with high-scoring games in 1A 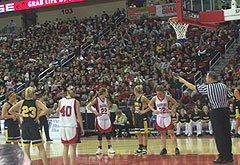 The girl’s state basketball tournament opened this morning with the quarterfinal round in class 1A.

Newell-Fonda has no seniors on the team but the Mustangs played like veterans down the stretch. After seeing a 17 point second half lead evaporate the Mustangs responded with a strong finish as they ousted fifth ranked Southeast Webster 80-75.

The Mustangs pressure defense forced 29 Southeast Webster turnovers and also canned ten three pointers as they improve to 21-3 and advance to the semifinal round. All stater Jennifer Jorgensen finished with 34 points and 13 rebounds as the Eagles close out the season with a record of 21-4. Newell-Fonda coach Dick Jungers says the Mustangs needed to make it full court game.

The Mustangs hit six three pointers in the opening half to build a 13 point lead at the break and finished the game 10-of-26 from behind the arc. Trailing 53-35 the Eagles rallied and took a 62-60 lead after a steal and layup by Jennifer Jorgensen with six and a half minutes remaining before Newell-Fonda regained control with a 9-0 run to take the lead for good. The 155 combined points is a record for the 1A tournament.

Top ranked Dunkerton has not had many close games this season but they survived a hard fought contest in their 1A opener. Kayla Waskow poured in 31 as the Raiders held off upset minded Woden-Crystal Lake-Titonka 70-68.

Waskow says they handled the pressure situation of a close game. For much of the game WCLT attacked Dunkerton’s press and got easy baskets. In the end, 25 turnovers may have prevented the Tigers from posting the win. The Tigers end the season with a record of 22-3.

In the third game, Lawton-Bronson took command with a 25-6 run that erased a three point deficit and the Eagles rolled to an 80-48 win over Exira. Senior guard Katie Sorensen led a balanced attack with 17 points, five assists and six steals.

After making it to the semifinal round last year Sorensen says the Eagles will not be satisfied with just one victory. Sorensen was one of eight Lawton-Bronson players who scored eight or more points. Lawton-Bronson improves to 22-3. Hallie Christofferson had 24 points and 12 rebounds to lead Exira which closed out the season with a record of 21-2.