You are here: Home / Recreation / Entertainment / Iowa woman is obsessed with deer hunting 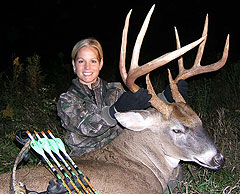 A southeast Iowa woman quit her job as an airline flight attendant to pursue her deer hunting hobby and now hosts a nationally-broadcast hunting TV show.

Thirty-two-year-old Tiffany Lakosky lives on 800 acres in rural Henry County, south of Mount Pleasant, and says her husband of five years convinced her to try bow hunting when they were still dating.

Lakosky says: "I was not raised hunting at all. I used to fish with my dad a lot. Lee used to work at an archery shop up in Minnesota for many years and he introduced me to archery and then, of course, to see him, I had to be up there shooting and then about two years after I started shooting, he said, ‘You want to try hunting?’ and I said, ‘That sounds like fun, I’ll try it.’ Went out the first night and shot a buck." She says deer hunting was love — and obsession — at first sight.

Lakosky and her husband, Lee, co-host the TV program "Gettin’ Close," carried three times a week on the Outdoor Channel. Lakosky, a petite five-foot-two blonde, says she’s harvested more trophy bucks than most men twice her size and age. "In all honesty, I never, ever thought I would become as addicted to the sport of archery and bow hunting and hunting in general as I did," she explains,"it’s just something about being out there. You never know what’s going to come up. I don’t know — I guess what makes any of us get addicting to hunting and the thrill of it. It’s just an adrenaline rush when an animal’s out there and then when you shoot it and it’s like, ‘Oh my gosh!’ Just nothing beats that feeling."

So why aren’t more women into hunting? Lakosky says many ladies are coming around, including her own mom. Her 57-year-old mother just started learning archery last year and went to Canada last year and shot and killed a black bear with a muzzle loader. Lakosky quoted her mom saying, "I didn’t realize the camaraderie of being in the hunting camp with everybody and how much fun you had." Now, Lakosky’s mom wants to try the challenge of bow hunting for turkeys.

Both Tiffany and Lee Lakosky will be in Des Moines later this week to lead a panel discussion at the Iowa Deer Classic, running Friday through Sunday at the Iowa Events Center.