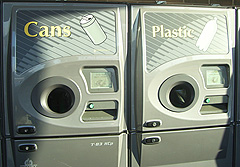 A committee in the Iowa house has voted to add a nickel deposit fee to all water, juice, tea and sports drink containers sold in Iowa.

The debate in the House Environmental Protection Committee pitted Democrats against Republicans. Representative Beth Wessel-Kroschell, a Democrat from Ames, argued for adding more containers to the state’s nickel deposit law.

“I believe this benefits all of us for the reason that it cleans up our roadways,” Wessel-Kroeschell said. “…It’s also a benefit to control what goes into our landfills.” But Representative Thomas Sands, a Republican from Columbus Junction, countered that it’ll be a pain to return the containers to the store rather than recycle them at the curb.

“Why…would I want to haul the darn things in the car to some store that may or may not take them and haul ’em around for a while until find one that did take them? How is that moving forward?” Sands asked. “Representative Sands, unfortunately not all Iowans are as responsible as you are,” Wessel-Kroeschell replied. Wessel-Kroeschell believes the nickel deposit will prompt up to 90 percent of noncarbonated drink containers to be recycled, a far higher number than are being recycled today.

“I see people throwing their bottles in the garbage all the time,” she said. “They’re littering and putting them in our landfills.” Representative Vicki Lensing of Iowa City was among the other Democrats on the committee who voted for the bill.

“The bottle bill is 30 years old. There is a generation that’s grown up not knowing otherwise,” she said. “I certainly think that people are looking for expansion.” But Representative Betty De Boef, a Republican from What Cheer, opposed the bill because she argued it’s unsanitary for grocers to handle the returns. De Boef picks up discarded cans and bottles along the roadside when she takes a walk and finds them filled with insects and even rodents.

“And I wash ’em. I don’t bring ’em back that way, but I know it’s a real problem,” she said. “I know that there’s a lot of people who do not clean them up.” The bill which cleared the committee Monday afternoon also raises the handling fee distributors pay to redemption centers. The next hurdle for the legislation is the full, 100-member Iowa House.