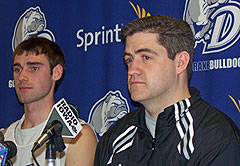 The Bulldogs open this afternoon against Indiana State. The Bulldogs will try to accomplish something that rarely happens, the regular season champ also claiming the tournament crown.

Drake coach Keno Davis says sometimes the team that wins the conference isn’t set up to win on the back-to-back days in a tournament. Davis was named the conference coach of the year Thursday for leading his team to the regular season title.

Indiana State beat Wichita State in the play-in round.