You are here: Home / Recreation / Entertainment / Film tells story of one of Iowa’s most notorius crimes 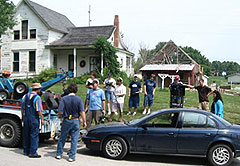 A feature film inspired by one of Iowa’s worst mass-killings will make its world premiere later this month in the town where the murders took place.

“Haunting Villisca” is a fictional story built around the true-life near-century-old axe murders of eight people, including six children, at a house in the Montgomery County town of Villisca.

The slayings in 1912 were never solved. Kimberly Busbee co-wrote the screenplay, and has a small acting role in the film. She says they researched the court case and pulled actual dialogue from the witnesses on the stand in the various trials, “so it’s pretty exciting because it’s based in history but it has a current story that is fictional.” Parts of the movie were shot in the aging white house where the killings took place and Busbee says there were unexplained occurrences that happened during filming.

Busbee says: “It was pretty creepy. We did have crew and cast with incidents happening to them. A lot of weird things like voices in rooms when nobody was in the room and people feeling cold spots in the house and one crewmember claimed to be pinned against the wall and couldn’t move for a few minutes.”

Considered one of Iowa’s worst-ever crimes, J.B. Moore, his wife Sarah and their four children; Herman, Boyd, Katherine and Paul were slain in their beds by an unknown assailant. Two child houseguests, Lena and Ina Stillinger, friends of the Moore children who were just staying the night, were also murdered. Despite two trials and a grand jury investigation which involved a “deranged pervert preacher,” the murders remain unsolved.

Busbee says the fictional story of the movie follows a college professor with a guilty secret who is drawn to Villisca where he seeks his own redemption by trying to free the trapped spirits and face the evil harbored in the small house. The movie will be shown at Villisca’s historic Rialto Theatre on March 29th and 30th. As for when the rest of Iowa will be able to see it — or a wider audience — Busbee says that’s still being determined.

Busbee says they’re talking with distributors and sales agents about the potential ways to market the movie to a broader audience. For now, if you can’t attend the premiere, she suggests checking back to the website “www.hauntingvillisca.com” for details. Some of the other actors in the film include: Iowa natives GregAlan Williams, known for roles in “Remember the Titans,” “The West Wing,” and “Boston Public,” and James Serpento and Michael Cornelison, both of whom were in “The Final Season.”