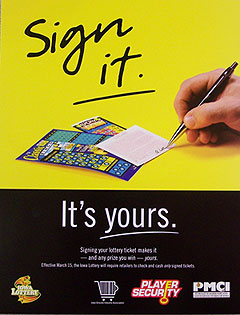 The Iowa Lottery is ready to implement the first of a couple of changes designed to protect players from being scammed out of a winning ticket.

Iowa Lottery Vice President Mary Neubauer says the first change begins this Saturday, and as of that date, players will be required to sign any ticket they bring in to have checked, or to cash in. She says that applies to all scratch tickets, pull tabs and lotto games.

The changes is the result of questions about the security process of the Iowa Lottery by the State Ombudsman following major problems in the Canadian lottery. Neubauer says the current 230-million dollar PowerBall jackpot is a good example of why they’re looking to improve security. She says they’re trying to provide players with more tools to protect their tickets and the prizes they have won. Neubauer says if you had the winning ticket for the 230-million dollar prize, then it would be worth your time to sign your name to the back of the ticket.

Neubauer says your signature carries all the weight in deciding who owns a ticket, as a lottery ticket is legally a "bearer instrument" meaning that without a signature, whoever holds the ticket is considered the owner of the ticket. Retailers will be checking for the signature, and when you try to cash in a ticket of 600-dollars or more at the Iowa Lottery offices, you will be asked for an I.D.

Neubauer says retailers are being trained to make sure all the tickets are signed, and they face potential penalties if that doesn’t happen. She says the retailer’s licenses to sell lottery products are now at stake, as she says the license could be suspended if they don’t have customers sign the tickets. Some people might not want to sign their names to the tickets, but Neubauer says it’s not something you want to joke around with if you want to get your money.

"Our message to folks has been, if you want to sign Santa Claus’ name to the back of the ticket, you’re welcome to, but then Santa Claus is the only one who would actually be able to claim that prize," Neubauer says. The other security change is coming in May, when Neubauer says Iowa Lottery terminals will begin printing out receipts for tickets that are checked to see they are winners.