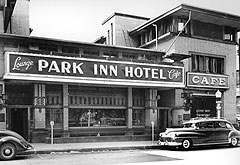 A project in Mason City is the latest to receive a Vision Iowa grant to develop a tourist attraction. The nine-million dollar grant is focused primarily on the renovation of the Park Inn Hotel, which was designed by Frank Lloyd Wright. But, Mason City’s proposal includes six other projects that carry a price tag of nearly 34-million dollars.

Jim Fitzpatrick, representing the Mason City Chamber of Commerce Foundation, attended today’s Vision Iowa Board meeting in Des Moines. He calls the Vision Iowa grant "a reinvestment in the heritage of a northern Iowa community that has a lot of history to show." Fitzpatrick says, judging by the fundraising effort, the hotel will attract people from all over the world when it re-opens in 2010.

"There’s a lot of local fundraising going on to meet the matches required," Fitzpatrick said, "but there’s also dollars being given on a more international basis from people who have significant passion about the work Frank Lloyd Wright did." Plans call for the hotel to re-open on September 10, 2010, the building’s 100th birthday.

Wright built six hotels throughout his career, but the one in Mason City is the only one still standing. Fitzpatrick says that fact alone will make it a tourist destination. However, he adds that there are other architectural landmarks built by Wright in Mason City that people are already coming to see. "So, (the hotel) is compounding on something that is going well already," Fitzpatrick said. The Park Inn Hotel closed in 1972. The owners plan to reopen the Park Inn as a 27 room boutique hotel.