You are here: Home / Crime / Courts / UNI campus locked down for a time after threat 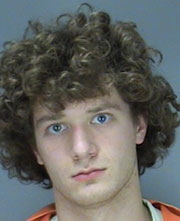 A tense two-hour lockdown situation occurred on the campus of the University of Northern Iowa last night. A threat of a gunman on his way to the campus caused UNI to issue its first-ever campus-wide alert, which included a lock-down of the Dancer Hall dormitory.

UNI spokesman Jim O’Connor says police received a call from the resident assistant at Dancer Hall just after 5 p.m.. The R-A received a call from one of the students on the floor who was concerned. Police went to the hall and interviewed the girl and saw a text message and believed it was a credible threat.

The other nine residence halls on campus were locked down as a precaution as well until the all clear was given about 90 minutes later. O’Connor said students, faculty and staff were notified through the new system. O’Connor says the information police had made them feel if the man arrived on campus, he would focus on Dancer Hall. He says as soon as police felt they needed to lock down campus, they did it.

O’Connor says the uni alert system was just activated by the campus, with the final testing on the system just a couple of weeks ago. It’s the first full scale use of the system. O’Connor says they were able to issue the alert and then give the all-clear just after 7 p.m.