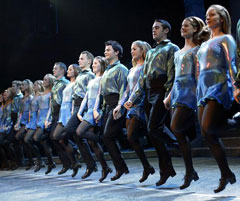 With Saint Patrick’s Day on Monday, many central Iowans will kick-start their celebrations tonight with a performance of "Riverdance." The energetic tribute to Irish music, dance and culture is making its fourth, and apparently final, appearance in Des Moines.

Mave Croke is the show’s dance captain and explains why this is billed as the popular program’s "farewell tour." Croke says Americans have been so supportive of the show that they want to revisit every town where Riverdance has played before one last time as a way to say "thank you."

Now in her fifth year on this tour, Croke is a native of Waterford, Ireland, and has danced all over the world — including North and South America, Asia, Australia, India and most of Europe. She has performed on the Great Wall of China, the Kremlin in Russia and the Acropolis in Greece. Croke says it’s a thrill to bring the show back to Iowa, where it’s already been seen by some 58-thousand people, many of whom will be returning this weekend.

Croke says: "The show is the same and has been the same for many years but there’s always a new cast coming so it brings new energy into the show. The cast does change a lot and it’s always good to see that because it re-energizes the old people and then the new people bring loads more energy into the show." As dance captain, part of Croke’s job is to teach the steps to new-comers. She says the large cast is always in a state of flux. She says there are about 30 Irish dancers, two tap dancers, six Russian dancers, a Flamenco dancer — and the band.

There are five Riverdance shows through Sunday at the Civic Center of Greater Des Moines. Visit the website "www.civiccenter.org" for details.