You are here: Home / Human Interest / Snow goose migration bigger than ever 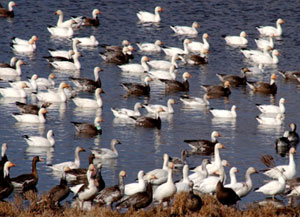 A sign of spring has arrived in southern Iowa. It’s the snow goose migration and this year it’s bigger than ever. The migration occurs statewide but most of the geese, estimated at 1.4 million this year, will fly over southwest Iowa as they leave the final staging area near Mound City, Missouri.

Lowell Washburn, with the Iowa Department of Natural Resources, says the birds fill the sky as far as the eye can see. "The birds will start streaming northward, up the Missouri River, and they literally cover the sky from horizon to horizon," Washburn said. "As far south and as far north as you can look there will be lines of geese. It really is an incredible site."

Snow goose populations have more than tripled in 30 years – despite efforts to reduce their numbers. Some scientists believe the situation threatens the species’ survival because of damage to Arctic breeding grounds. "When you do damage up there, it isn’t like in the midwest," Washburn says, "you damage native eco systems in the far north and it may take many decades, if not over a century, to repair that damage." Since 1999, hunters have been allowed to shoot snow geese during the spring migration. Washburn says the emergency provision has not come close to reaching the goal of reducing the snow goose population by 50 percent.