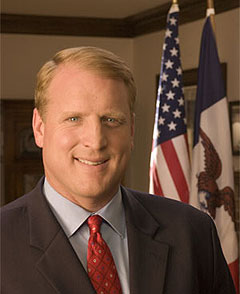 Governor Chet Culver said today he will likely veto the controversial legislation which expands the collective bargaining rights of Iowa’s public sector workers unless there’s more discussion of the issue.

Democrats, who hold a majority in the House and Senate, introduced the bill last week and pushed it through over objections of Republicans.

The governor is unhappy about what he calls the lack of input from the cities, counties, and schools who oppose the bill. At a news conference this morning, the governor said it should be back to the drawing board for the bill. "I want to be clear, there is a strong possibility that I will veto this bill, if a real effort to listen to the concerns of Iowan, local elected officials and government stakeholders at all levels does not take place," Culver said.

Culver asked for a public hearing on the bill before it passed the Senate, but lawmakers ignored that request. Culver says it’s important that his administration is at the table and involved in major public policy initiatives, and says it’s important to find the right balance between the executive branch and the legislative branch, "putting the people’s interest first."

Culver says it’s not too late to give the bill another look. "We can do whatever we think we need to do before we adjourn, to make changes, make modifications, to start over, a lot of different ways with time left in the session," Culver says.

The Iowa Senate has filed a motion to reconsider on the bill, which delays the time the governor has to sign it. Culver called that a step in the right direction. The legislation goes further than what the governor proposed in his condition of the state address, which was to let workers bargain over the discipline used the right to fire them.. He said he’s confident that labor and management can reach a consensus on how to expand workers collective bargaining rights, but the bill so far does not strike the right balance.

House Speaker, Pat Murphy, a Democrat from Dubuque, issued this statement in reply to Governor Culver’s comments on the collective bargaining bill:

"We believe that the collective bargaining bill approved last week is good for middle class families, including Iowa teachers, police officers, and fire fighters. Our collective bargaining laws have not been changed in over 30 years and the bill is a responsible approach. Open scope bargaining simply gives public employees the same bargaining power as private employees in Iowa and it is also used in 27 other states.

I strongly believe the Governor should sign this legislation. We have co-equal branches of government and we will continue to work with Governor Culver in the closing weeks of the 2008 session to bring resolution to these issues, as well as the state budget."

"I am pleased to see the governor is inclined to veto this legislation. House Republicans were prepared to support the non-controversial bill which was drafted as minor, corrective changes by the Public Employee Relations Board. There is a way to bring consensus to this legislation-by completely removing amendment H-8164. Short of a thorough removal of that amendment, the bill should be vetoed by the governor."