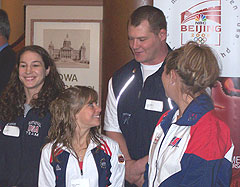 Some potential Olympic athletes with Iowa ties were recognized at the Iowa capitol Tuesday.

State Senator, Nancy Boettger, a Republican from Harlan, welcomed the athletes who hope to represent the U.S. this fall at the Olympics in China.

"We can’t even begin to tell you how proud we are of you folks here and how we’re looking forward to watching on television as you represent Iowa and the United States," Boettger says, "We’re here through the international relations committee, Iowa considers it very important to build positive relationships with countries all around the world."

Boettger says the athletes have the potential to be great representatives for the state. Boettger says, "You have a most wonderful opportunity through the Olympics to be great ambassadors for Iowa and build that strong friendship and image with folks from all around the world." Olympic hopeful Shawn Johnson of West Des Moines is one of the top gymnasts in the world. Johnson says she started gymnastics at the age of three and says if she makes the Olympics, she hopes to represent Iowa the best she can and have a great time.

Tolly Thompson grew up on a farm in northeast Iowa near Janesville, and hopes to make the mens’ wrestling team. Thompson says a lot of the athletes got the traits that make them competitors growing up in the state of Iowa and he continues with his 15-year dream of being an Olympic champion. Thompson was a national champion while wrestling for Nebraska. Other athletes on hand included skeet shooter Haley Dunn of Eddyville and wrestler Joe Williams of Iowa City.

Most of the athletes will find out if they make the team during the U.S. Olympic trials in June. The Beiijing games are August 8th through the 24th.