You are here: Home / News / Keno Davis named A.P. Coach of the Year 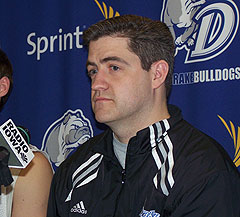 Drake coach Keno Davis has been named the Associated Press college basketball coach of the year. The announcement was made earlier today in San Antonio where the final four begins tomorrow.

The 36-year-old Davis led the Bulldogs to a magical run as the finished with a 28-5 mark, including a school record 21-game winning streak. The Bulldogs also won the Missouri Valley Conference regular season and tournament titles and played in the NCAA tournament for the first time since 1971.

It marks the first time a father and son have won the award. Tom Davis was named the national coach of the year after leading Iowa to a 30-5 mark and a trip to the Elite Eight in 1987, his first season at the helm.