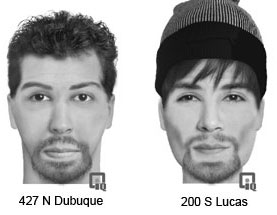 Iowa City police are looking for clues in three assaults on women this weekend. Two women reported assaults by a man while they were walking in the city, while a third reported a man entered her residence and sexually assaulted her.

Sergeant Troy Kelsay says they’ve put together composite sketches of the man in each case and are trying to figure out if the assaults are related.

He says they don’t know if the assaults are related, but says there are some similarities in the composite sketches put together. In the case of the two women who were walking, the man pushed them down and tried to remove their undergarments, and the man then fled after the women fought back. Those two assaults match a pattern of several unsolved assaults over the past several months.

Kelsay says a community task force has been working to address the series of assaults. "While I wish I could say that we had hoped that they’d all gone away and that they weren’t going to resume again, in reality, with warmer weather this is something that had been anticipated and planned for and we are already trying to reposition resources to address it," Kelsay says.

Kelsay says they continue focusing on the assaults and are trying to educate women on how to be safe when out alone. He says when you’re walking, you need to be aware of your surroundings, as in two of the assaults the man came up from behind them. Kelsay says they also need timely reporting so officers can follow clues quickly. Kelsay says they’re pursuing every lead they can.

Kelsay says there are some "persons of interest" that he says have a history of this, "but nobody that he can say with any certainty that this is whose responsible." The two women who were assaulted while walking were not injured, while the woman who was sexually assaulted was taken to the hospital for treatment and released. Kelsay says they are asking the public to call in any information on the assaults.

The Iowa City Area CrimeStoppers is offering a reward of up to one thousand dollars for information leading to an arrest in these assaults. You are ask to contact CrimeStoppers at 358-TIPS (8477). Individuals providing information do not have to reveal their identity to collect a reward.