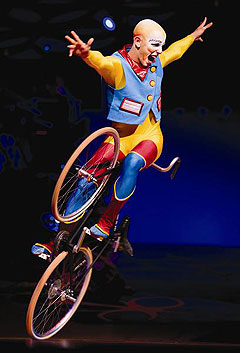 Cirque du Soliel features more than 50 performers from 19 nations. One of the event’s spokesman is Justin Beard, a California native who counts stilt-walking among his list of talents.

Beard says, “It’s an absolutely beautiful show full of acrobatic spectacles, incredible trapeze acts, bright colors, live music, truly one of a kind, beautiful, beautiful images in the show.” This incarnation of the Cirque — or circus in French — is appearing in 40 cities across the U.S. and Canada, with stops in Cedar Rapids, Des Moines and the Quad Cities. Beard says don’t mistake this event for a “regular” circus.

“There’s no animals in this circus. There’s only humans. Some of the highest-trained and most incredible acrobats on the planet are scouted and recruited by Cirque du Soliel,” Beard says. “The acts are top-notch quality. The esthetic of the circus isn’t so much a circus in a ring but it’s set up in an arena and it’s much more of a theatrical experience rather than the typical lion tamer picture you might have of a circus.” He says this touring version of the Quebec, Canada-based show is known as Saltimbanco.

“It comes from the words ‘saltare in banco’ which means to jump on a bench, which is Italian. It comes from the olden days when a performer would jump onto a bench and take a public space and turn it into a performative space,” Beard says. The show is in Des Moines at the Iowa Events Center for six performances Thursday through Sunday, with stops in the Quad Cities April 15-18 and in Cedar Rapids April 23-27. For information, visit the Cirque du Soliel website .