You are here: Home / News / Iowan training for chance to shoot in Olympics 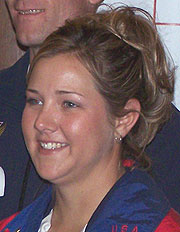 While several Iowans are waiting for the respective trials to see if they’ll make the U.S. Olympic team, an Iowa woman has already made a spot as an alternate in skeet shooting. Haley Dunn of Eddyville says her routine now is one of continued training to be ready for the August games.

Dunn says she shoots every day, except for travel days, works with a sports psychologist on the mental part of shooting, and there is a little bit of down time. Dunn says the mental aspect of her sport can’t be overlooked.

She says being able to control your nerves and keeping your focus is a big part of the shooting. Dunn says there’s not the physical aspect you see in other sports, so the mental aspect of focusing eight hours a day is key. While thousands of Iowans take shotguns to the fields to shoot pheasants and deer, Dunn’s gun is made specially for her sport.

Dunn says it’s fit just for her, with the correct balance, and is different than the average gun you would take out into the field to hunt, but she says skeet shooting is something almost anybody can do. Gymnasts and track athletes usually dominate the headlines at the Olympics, but Dunn doesn’t feel left out as she understands why.

Dunn says shooting is not nearly as media friendly as some of the other sports and she says guns can be controversial “And you know, that’s okay, I know that,” Dunn says. While shooting might not garner the most media attention, Dunn says there are still opportunities for some of the endorsements that come to other Olympic athletes.

Dunn says there are major possibilities for endorsements in the shooting industry, and they are trying to branch out to gain interest in other areas as well. The Olympics begin in Beiijing, China on August 8th.