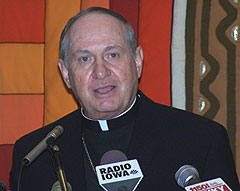 The incoming bishop for the Des Moines Catholic Diocese will be among the tens of thousands in Washington, D.C. for this week’s visit by Pope Benedict.

Bishop Richard Pates says he’s been able to meet Pope Benedict three times before, once since he became pope during an audience in Rome.

Pates says Pope Benedict is a person who “represents a great openness.” He says, “Sometimes when you visit the different congregations, the offices of the Holy Father, they like to direct the conversation. But, when we were with Cardinal Ratzinger, he opened his arms and says, ‘What can I do for you? What would you like to talk about?’ and that became the agenda for our meeting.”

Pates is an auxiliary bishop from the Archdiocese of St. Paul, Minnesota, and was named last week as the new Bishop of the Des Moines Catholic Diocese. Pates says Pope Benedict is well liked around the world. Pates says, “He comes from an academic circle. He is a very competent theologian. He has a great deal of warmth and also a real strong ability to key in you, as an individual, at the moment that he’s speaking to you and establish some really valuable contact.”

Pope Benedict is to arrive in Washington D-C today with some 12-thousand people expected at the White House welcome ceremony on the South Lawn. On Thursday morning, there will be a Mass at Washington’s new baseball park, a Mass which Pates plans to attend. Pates says: “I think that he will speak to the fact America is a very strong country. It is still a believing country. Unlike Europe, it has not gone down the slippery slope of relativism, and encourage us on our path and our journey and to be aware of the need to focus in to have God as the center and the real compass of our lives.”

Benedict, who turns 81 tomorrow, will attend a prayer service with the nation’s bishops — including Pates — at a Washington basilica. During the pope’s six-day visit, he’ll also travels to New York for an address to the United Nations and Mass at Yankee Stadium, with Pates predicts will be heavily attended. “People like him. He is a little bit more retiring and shy than Pope John Paul the Second, who was so open and honest. It’s a little bit of a change of style but I think he has some very valuable insight and understanding that will be uplifting for all of us.”

The meeting between President Bush and Pope Benedict is the 25th between a pope and a sitting U.S. president.