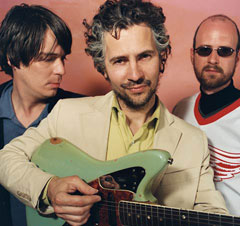 Organizers of a two-day, outdoor summer music festival in central Iowa have revealed the headline acts.

The inagural 80-35 Music Festival in Des Moines will include headliners The Flaming Lips on Friday, July 4 and The Roots on Saturday, July 5. Amedeo Rossi is with the Greater Des Moines Music Coalition (DMMC), which is organizing the festival in downtown Des Moines.

"We’re looking at 40 plus acts to perform during that weekend, with 10 on the main stage," Rossi said at a Tuesday afternoon press conference. Other national acts confirmed so far include Yonder Mountain String Band , Girl Talk , and Drive-By Truckers . Organizers are hoping to attract 15,000 fans on the holiday weekend.

Rossi says Des Moines city leaders are hoping 80/35 will become a "signature event" over the Fourth of July holiday. "And it was a nice hole in the schedule…we’re actually picking up a lot of bands that are routing to other festivals in the same time frame. So, it’s working out quite well," Rossi said. The non-profit DMMC secured $400,000 to produce the 80/35 Music Festival.

Rossi admits his organization has already spent a "good share of that," but believes there’s enough money to continue booking more national, regional and local bands. Tickets for 80/35 go on sale Friday, online at www.IowaTix.com .