You are here: Home / Agriculture / Dispute over manure piles one of the remaining issues for Legislators 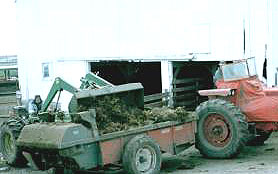 A dispute over manure is among the issues that remain unresolved as lawmakers attempt to conclude the 2008 legislature session.

Most of the manure from the state’s large livestock operations is in liquid form, but poultry operations and a few hog and cattle confinements accumulate dry manure which is sometimes piled up outdoors before it’s spread as fertilizer on fields. Eldon McAfee has been representing Iowa poultry, beef, and pork producers at the statehouse. He says the bill will make the rules for livestock farmers more consistent.

"The reason this bill’s being brought for confinements is to allow confinements, the newer ones, to do what the open feedlots can do with their manure — that is stockpile it," McAfee says. By law, livestock confinements which keep all the animals indoors can not stockpile their dry manure unless it’s piled in some sort of storage structure, or any runoff from the pile is contained.

But open feedlots, where all the animals are outdoors, are freer to stockpile their dry manure. House Republican Leader Christopher Rants of Sioux City says he’s no expert on the issue, but he’ll probably support the move as it seems to settle a lawsuit brought against the state.

"I think that bill will receive some considerable debate, but as you saw in committee last night, it also passed on a unanimous vote," Rants says. But key Democrats like Representative Mark Kuhn (KYOON) of Charles City are adamantly opposed to the bill.

"There’s nothing that limits the size of the stockpile in this bill or where it could located, what types of soils it could be located on," Kuhn says. "The DNR says they’ve seen stockpiles 150 feet long, 25 feet high." Representative Marcella Frevert, a Democrat from Emmetsburg, worries because there are no restrictions on where manure can be piled, a protection she says homeowners deserve.

Frevert says neighbors who live near a manure stockpile swept up a bucket of dead flies every day.

"A five gallon pail of flies. Their son was a third grader and he finally took his bike to town to he grandpa’s house because he couldn’t ride it outside," Frevert says. Others say the flies and odor could have come from inside the confinement rather than the pile of dry manure outside.

Iowa Department of Natural Resources officials say they fear nearby streams and lakes will be contaminated from runoff from these manure stockpiles. But McAfee, the man representing the poultry, hog, and cattle producers, says the bill has adequate safeguards.