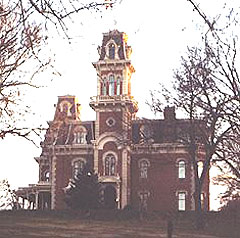 Iowa’s governor says he felt Friday morning’s earthquake.  Governor Chet Culver says it was nothing to be alarmed about, but it "certainly got (his) attention."

Culver spoke with reporters about the experience. "It was a little bit strange, I must say. About 4:30 this morning I was up and definitely felt the whole third floor shaking, certainly our bed (was shaking)," Culver said Friday afternoon.

"I was kind of relieved to see there actually was an earthquake a couple of hours later. I wasn’t quite sure what was going on there on the third floor of Terrace Hill."

Terrace Hill is the governor’s mansion, situated on the second-highest hill in Des Moines. It was built in 1869 and some claim they’ve seen a ghost in the mansion. Culver made no mention of a ghost as the cause of his early-morning experience.

The governor apparently is an early riser. "I’m usually getting up at 4:30 at least a few days a week to work out so my clock is set," Culver told reporters during an interview at the statehouse. "Plus, there’s a lot going on up here that I’ve got to think about."