You are here: Home / Weather / Flood warnings issued after rain and hail fall this morning 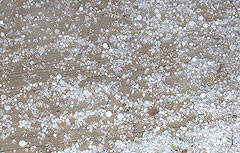 A dozen counties in eastern Iowa are under Flood Warnings after fast moving thunderstorms passed through the state this morning.

National Weather Service meteorologist, Brian Pierce, says a number of rivers are spilling out of their banks following several weeks of wet weather and the effects of snow melt from Minnesota and Wisconsin.

Pierce describes the flooding along the lower Wapsipinicon River as "serious," while portions of the Cedar, Iowa and Skunk Rivers have minor to moderate flooding. "The more substantial flooding is going to be on the main stem of the Mississippi River," Pierce said. Some of the cities included in the Flood Warnings are Burlington, Keokuk, Davenport, Clinton, Cedar Rapids and Iowa City.

"The rain that (eastern Iowa) got today was fairly widespread, but it did come down pretty well. The rain that we’re looking at for the Thursday night into Friday time period has the potential to be far more substantial. At a minimum, it’s going turn around and slow down the rate of fall for any rivers that are already going down," Pierce said. The Mississippi River is expected to reach a 30-year high tomorrow in Burlington at 18.3 feet. Flood stage is 15 feet.