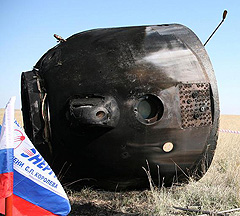 Iowa astronaut Peggy Whitson is downplaying reports she and her crew were nearly killed during last weekend’s fiery return to earth aboard a Russian space capsule.

The Soyuz came down hatch-first, not using the heat shield on its belly, and fell at a very steep angle, subjecting the crew to extreme G-forces which Whitson calls “dramatic,” at more than eight times the pull of gravity.

In an interview with NASA-TV, Whitson says once the capsule undocked from the service module, it was clear there was a problem with the decent as they entered the upper atmosphere. “We switched automatically to the ballistic mode which meant that we were going to be spinning up to eight G’s and coming in at a steeper descent. I saw eight-point-two G’s on the meter and it was pretty, pretty dramatic,” Whitson explains.

Russian officials say the capsule’s hatch was significantly damaged during re-entry and the antenna burned up, severing communication with the ground. The crew had to call the rescue team using a satellite phone — a phone NASA provided and which NASA demanded the last time a Soyuz landed far off target with an American on board.

The first Iowa woman in space had been aboard the International Space Station for six months, which left her body, already weakened by long-term weightlessness, particularly vulnerable to the extreme G-forces of re-entry. “Gravity’s not really not my friend right now and eight G’s was especially not my friend,” Whitson says, laughing, “but it didn’t last too long and impact, I guess because I’d heard so many stories, wasn’t quite as bad as I was expecting.”

They landed nearly 300 miles off-target in Kazakhstan. She says: “It wasn’t the search and rescue who got us out of the capsule. It was just some guys that had seen it and drove in. They probably saw the fire and drove in toward the scene.” The Beaconsfield native says her first breath of fresh air after being on the space station for six months wasn’t exactly fresh. “There was a little bit of a burning odor,” Whitson says, laughing. “What was nice was feeling the winds on my face and actually, I heard some birds, so that was kind of surprising.” 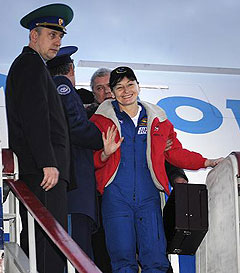 NASA says Whitson will be staying in Star City, near Moscow, for “some time” recovering, before heading back to Houston.

Whitson spent more than a year in orbit over her two six-month missions on the International Space Station — her first mission was in 2002. At 377 days, she now holds the American space endurance record.

Whitson, who’s 48, has also set a world record for most spacewalking time for a woman — at just shy of 40 hours.